First things first, the Danish Post had a separate company try delivering Fitzwilliam to me on Monday. Unfortunately, they came when I had just left to go meet up with my friend Anne in Copenhagen. Because it was a separate company, they just took the package back to Copenhagen central center for deliveries...which is pretty far from where I live (45 min. transportation).
Lucky we had to go to Copenhagen again Wednesday, so we could pick up the package on the way home (Anne had bought a IH Cyborg Bianca that same day, so we both were carrying large boxes on the train going home XD).
When we got back to my place, it was already late, but we couldn't wait to open our boxes and fangirl about our new dollies. My good camera was run out of battery, so we used my phone to photo the box opening of Fitzwilliam: 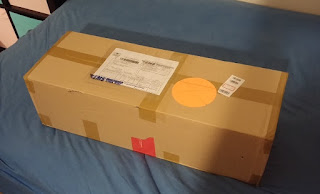 The box. It didn't weigh much 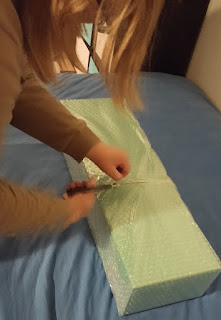 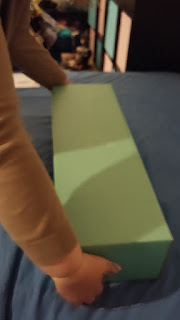 Now for the exciting part 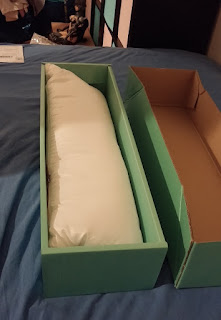 Hmm...I started wondering where the clothes and stuff was...it's always on top of the pillow 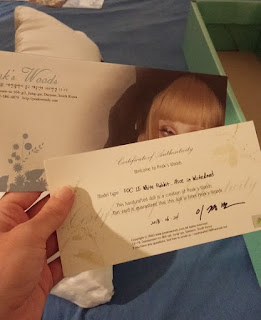 The CoA and Anne's hand XD 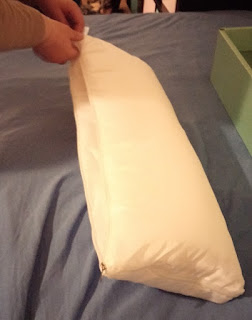 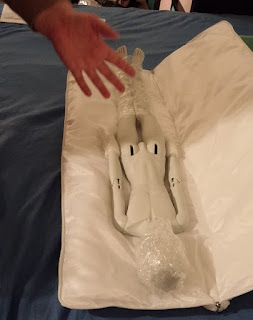 But nope. Only the random glass eyes where with him ;__;" Pretty saddened by this as I was super excited to see his outfit and the Oscar Doll eyes 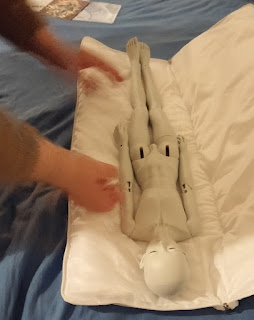 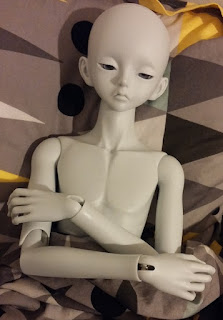 I just put in the eyes he came with. They are pretty actually...but a bit too big for him imo.
(Those hands *nosebleed*) 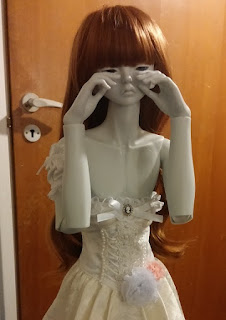 As the poor guy didn't have any clothes, his evil mum and auntie dressed him in a dress XD He isn't happy at all

So, that was a bit of a let down. More than $200 worth of stuff missing from the package...>_<" A little annoying, but PW were quick to send my stuff right away after I told them it was missing from the package. Apparantly the lady in charge of packing for PW was sent to the hospital, so its been a bit hectic at PW lately. I'm not mad at PW really, it can happen and they were really fast sending my stuff to me, but I SO looked forward to getting an almost full set doll for once. XD I was so let down...but I somehow had an idea it might happen as it sounded a little like PW had forgotten my order when I asked back in June. Anyway, he is a GORGEOUS doll and I feel so lucky to have him! *^^*

But it's not over yet XD
I also have Ludwig coming...but it has been so exhausting because of fuck ups made by the Danish Post. After I payed for import, they somehow asked to have him send back to Korea...oO"
Yesterday, when I checked my tracking, it didn't make any sense at all, so I called the Danish Post to learn how on earth I was supposed to get my package then. I got sent on through 4 different phone numbers before someone was able to help. They managed to call the package back, and put it back for delivery. I was very relieved that they could stop it from going back to Korea.
When I checked the tracking this morning, it said the package had been delivered to a different post office than what I had asked for, so I had to phone them again and ask wtf? The guy I reached told me he couldn't guarantee that the package would even still be at that post office, so he told me to wait for tomorrow where it is supposed to be delivered at my local post office. OH MY GOD!! How many fuck ups can you do with one single parcel? I'm SO tired of worrying over this.
I just hope Anne and I can go and get it tomorrow, and this will all be over. I was SO horrified when I had phoned the Danish Post. NONE of them even apologized for all the trouble they knew it was giving me. If I hadn't checked my tracking as often as I did, my parcel would be long gone to Korea now. I even asked "And who is going to pay for getting back my parcel?" whereto the guy on the phone just said "The sender is of cause". It's so typical no one takes any responsibility. A polite "We're sorry" had been nice. :(

So now I'll just wait till tomorrow...but without any real expectations as I just don't want to get disappointed again.

It's not all bad, I've just been BURNED pretty much XD'
BUT! Both Anne and I got new dollies, and they are gorgeous!! Look forward to seeing Anne's update about her gorgeous Bianca Cyborg lady *_____________*
Posted by Unknown at 15.22