I got a nice load of money from all the work I've been doing for the last month. Yay!
First thing I wanted to spend some money on was paying off a huge chunk on my White Rabbit layaway. So now I only need to pay $220 to be done with it. He is expensive XD
I hope I never want a doll this expensive again >__<"

Oh, and another news is; I've just spent a ridiculous amount of money on new faceup supplies :D
Yaaay!! I've been wanting to buy Rembrandt soft pastels for half a year now, and finally I had the money. I had planned to buy a set of 60 half sticks for around 600DKK (~$97) from a Danish supply store...but Danish prices are always way more expensive than anywhere else. So I tried googling if I might find the set of pastels on a british site (less expensive - no import taxes). And I did! I found www.jacksonsart.com where I could even get free shipping to my country if I bought for more than £100 (~$150), This site offered a set with 90 half sticks for £51 (~$77) so I could get more pastels for less money. 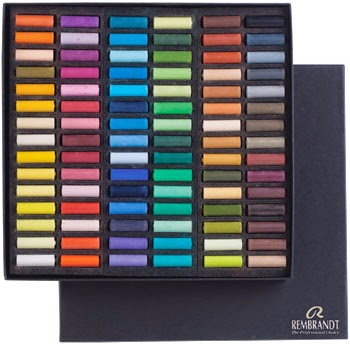 Just shows how overpriced stuff is here in DK. -__-" I'd love to support local stores, but the extra money is just too much.
Anyway, I ordered the set with 90 half sticks (its probably way more than I'll be needing, but it nice to have such a large range of colors to play around with ^^), 7 different Princeton brushes and 4 different Golden fluid acrylic colors. So I'm really excited and hope I'll have it all by the end of next week so I can do my sisters cute MSD head :3

But yeah...Its not even the 1st of February and I've already spent a lot of money XD
Posted by Unknown at 18.48