Examples of the Flash Diffusers ;)

I promised Lise to show the effects of the Flash Diffusers I mentioned buying on the 9th of January.
The pictures are from yesterday when I played around with Alice, but I need to do a bit cleaning in my room before I can give Alice her faceup, so this is it for now. 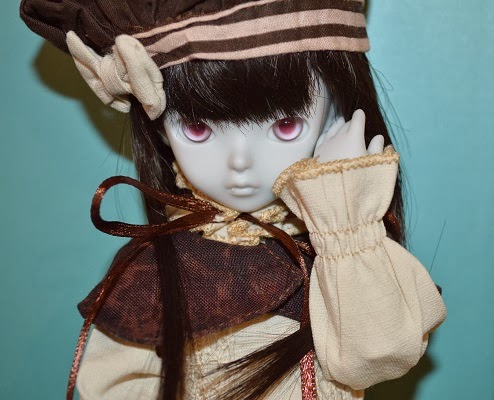 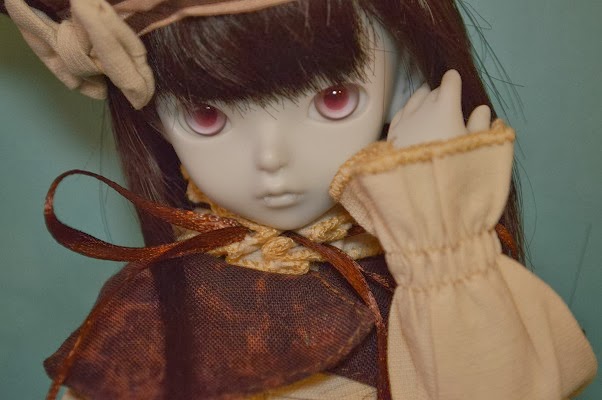 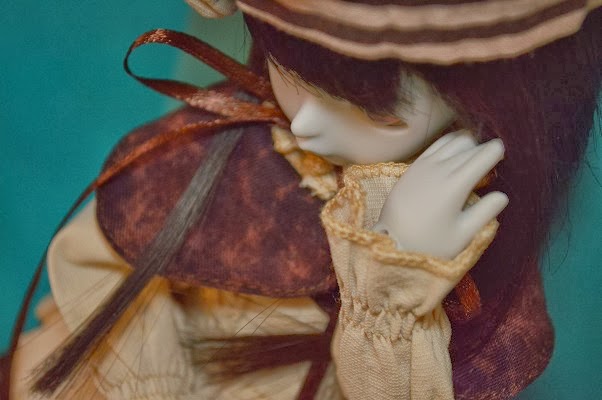 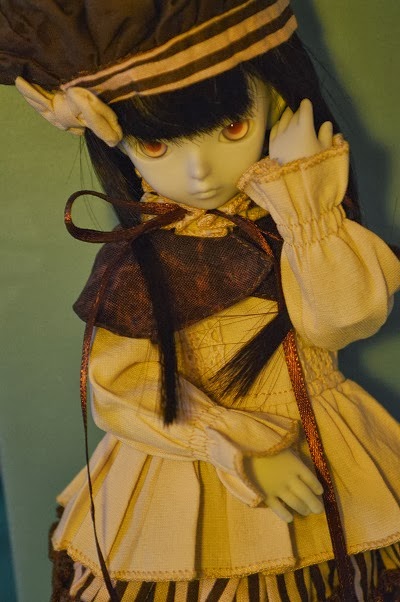 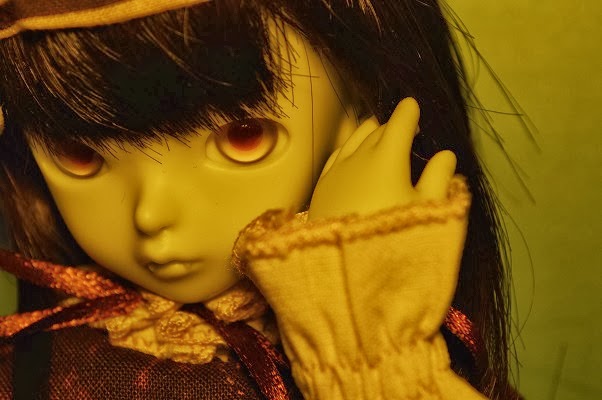 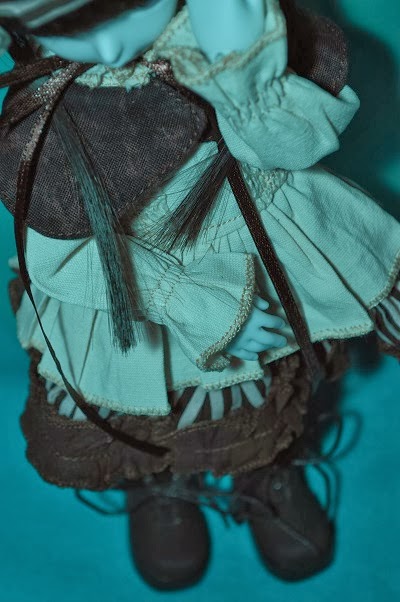 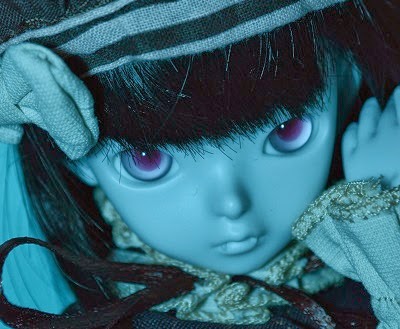 The less natural light there is, the more clear yellow or blue the motif becomes. On the first picture with the blue diffuser, the sandy color of the dress' shirt shines better through the blue - if that makes sense. It's really a great tool to play with. I like how it's not like a filter you just put on top of the picture, but it's more integrated I think. ^^
The white diffuser gives the picture a more warm feeling in my opinion. Here in Denmark, we have a very cold and clear light so it is normally only in the summer we get a chance at warm light. I think I will be using this diffuser most ;P
Posted by Unknown at 12.59 3 kommentarer:

FINALLY!! The day came when I could go get Alice home from the post office.

YES! Today it happened! My note from customs told me I could go pick Alice up from the local Post Office. Today it is exactly 120 days since I ordered her, so that was a pretty long wait. I think I almost grew a beard. >_<"

Anyway, I was really surprised that the Danish customs only wanted me to pay around $38 for her, I thought I would need to cough up the triple of that sum. Phew so this months budget is saved! XD

Any anyway...I went and picked up the package and it was SO smaller and lighter than I am used to. She is my first doll under 58cm, so I was really surprised that I could easily carry her around and stuff. So nice. ^^
When I got home I immediately grabbed my camera and started documenting the box opening: 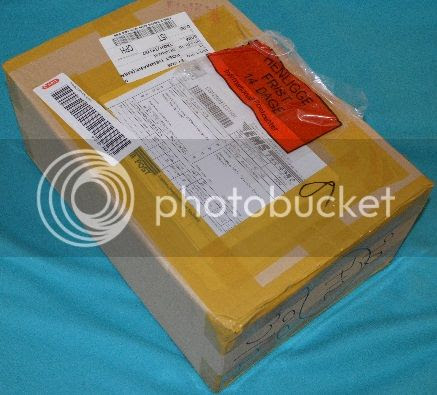 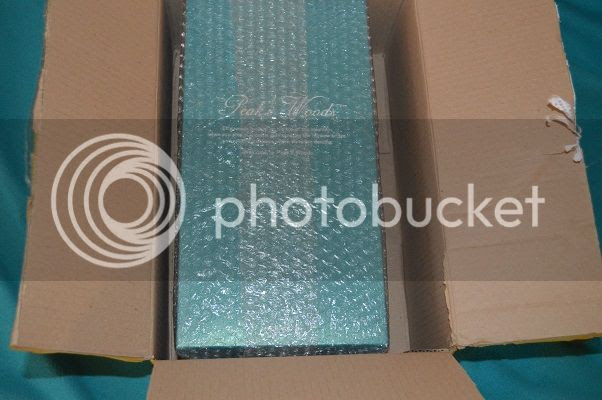 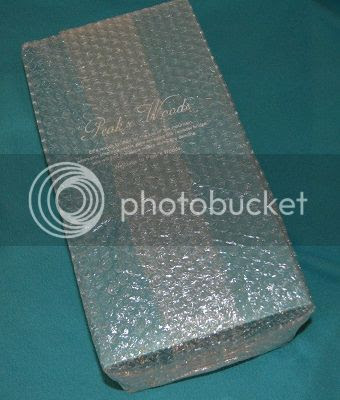 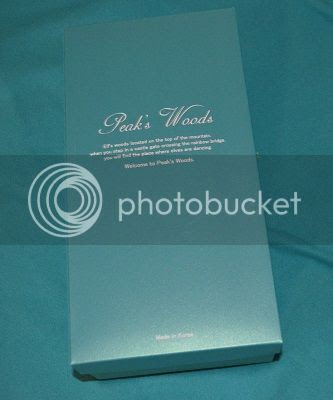 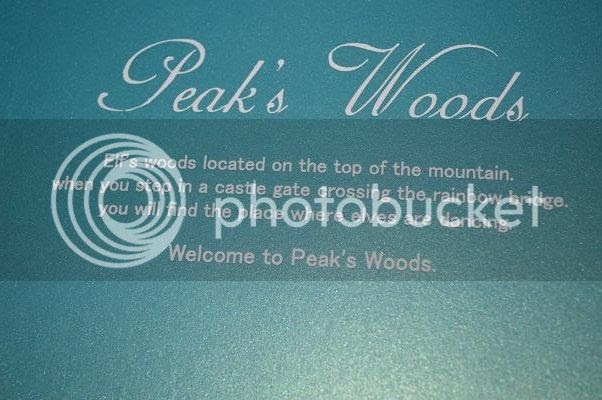 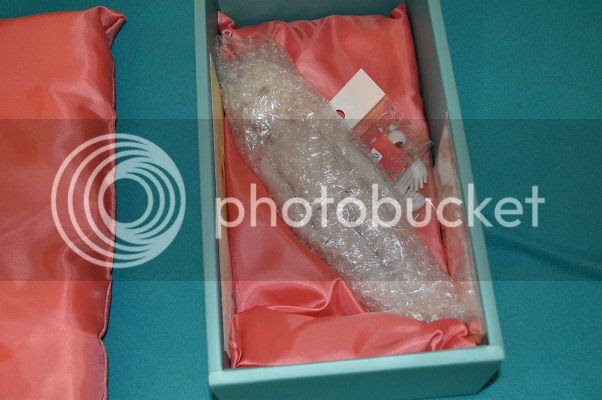 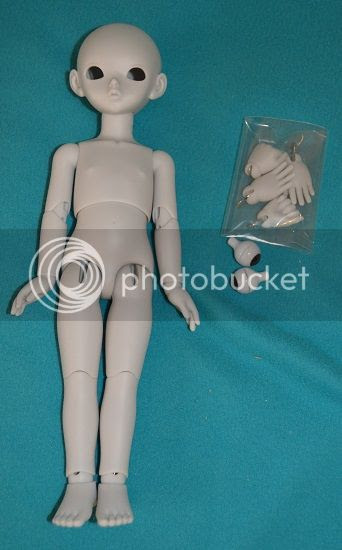 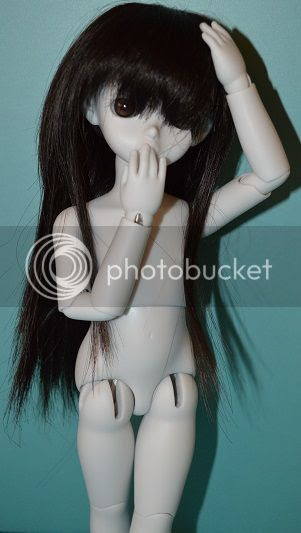 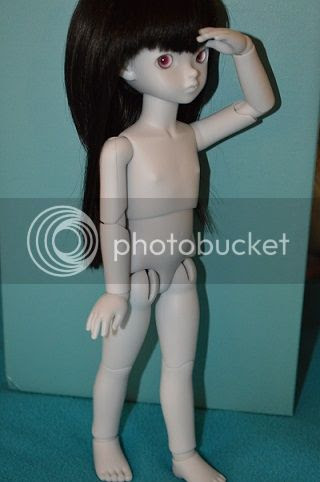 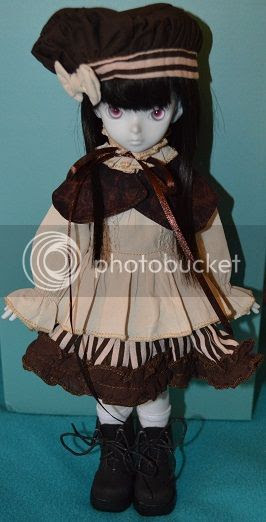 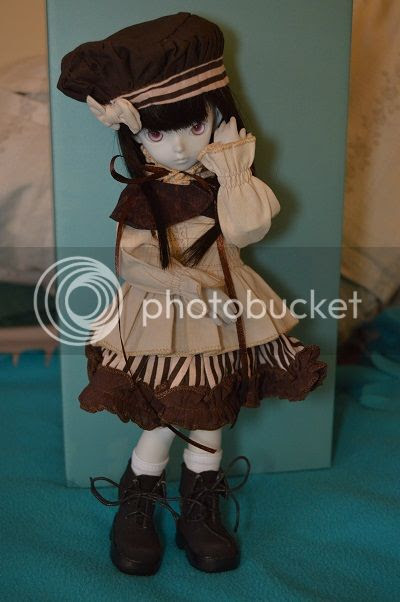 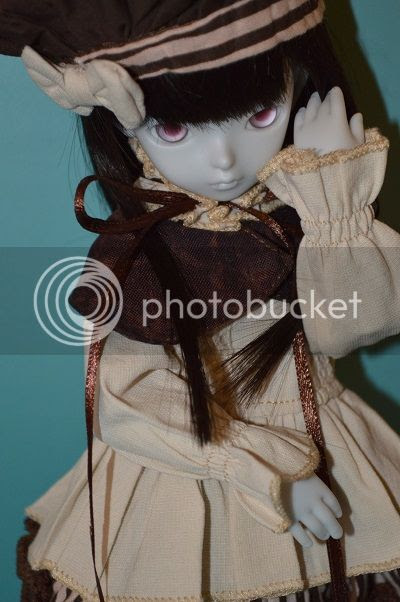 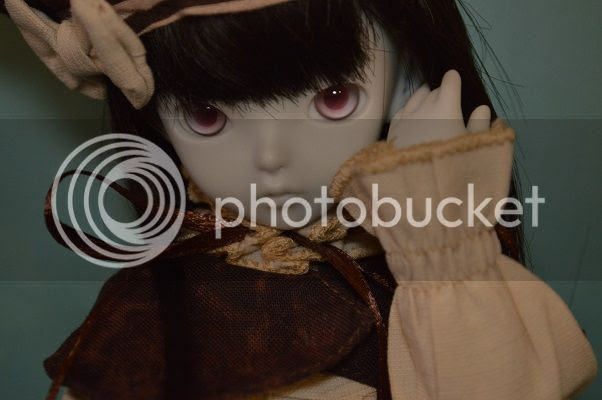 I was so excited about the resin color, and it is just as I thought, so I'm really really glad! She was totally worth the wait!
The clothes from Taobao is a bit big, but it looks really cute on her I think. The hat is sliding down at times though, but I should be able to fix that somehow, and if not, the set is just as cute without the hat ;P
I really like the eyes. I think they will really be awesome once I get her faceup done ^^
I might also want to get some brown socks for her...the white ones were the best of the three pairs I have, but I think brown ones would be better. XD
I've just been in happy-happy land all day because she is so perfect :3
Posted by Unknown at 16.49 3 kommentarer:

I saw a post on I'm Catching Fireflies by Kass, about how to manipulate the in-build flash on your camera. I really found that very interesting and went to my local photo-store to ask if they new the trick. The clerk at the store showed me a special designed Flash Diffuser equipment made for cameras like mine (Nikon D3200). It was not so expensive and included 3 colors: white, blue and orange. You slide the holder piece onto top of the camera, and then attach whatever of the 3 colored diffusers. So easy and it gives an awesome effect! I'll be playing with the Flash Diffusers as soon as Alice is here (muha). :D

Actually, I went to the photo-store to look at objectives. Not that I can afford one, but I was on my way home from my (passed!!) exam, and did not have anything better to do anyway. The clerk recommended me to buy a NIKKOR 40mm f/2,8G Macro lens. It is a bit pricy, so I'll probably not be able to buy it for quite some time, but I actually told him I wanted to photograph dolls and he was all "you can just bring a doll and your camera, then you can try the lens before you decide". That could be quite fun XD

So yeah, I can definitely recommend using Flash Diffusers. ^__^
Posted by Unknown at 23.18 2 kommentarer:

I just got the best news!! Peak's Woods finally sent my Alice!! :D
I'm so thrilled. The best thing that could happen before my exam tomorrow!

Yesterday I used www.dreamself.me to create the consepts of the 5 dolls I am waiting for.
You can see the pics under the 'The Crew' tab in the top of this blog.

I've search a lot for a doll creator that had both male and female stuff, AND was full body. But I saw the cute avatars Akatsuki from fushitebjd.blogspot.com had made, and wanted to use that creator to make my own. It has been really helpfull to make the avatars, since I've become more at peace with how my dolls should look and be and stuff. So the avatars are quite close to the ideas I have in my head on how my dolls will actually look. ^^

The story is far from finished, not even really begun, but I will probably write on it more seriously when I get Alice home. I think she will be a really big inspiration for me to write the story properly.

A girl on DoA has already recieved her Alice, so I hope it'll not be long before I hold my own. The color looks lighter on her (the DoA member) pictures than on the PW promotion pics, but it looks really nice anyway.
Posted by Unknown at 14.45 4 kommentarer:

The stuff from Taobao has reached my home, and I was thrilled to find most of the items even better than the sales pictures shown.

First off the dress for Alice is just amazing! It's just as it looks on the photos, just even more awesome in reality. The bow on the hat might need some extra stitching, but that's nothing. All in all I am really positively surprised by the quality considering the price. I only payed 188 yuan for the whole set of shirt, skirt, cape, hat and neckt-frill-thing so that has really been a bargain. So I'd have no worries buying from Odd Aristocratic again someday. ^^

The brown boots turned out to be black, but that is not really a problem, seeing as I will definitely use them anyway. They are very nice despite being black in stead of brown XD
I also bought a pair of white Mary Janes with pink 'ribbons'. On the sales pics the ribbons seem baby pink, but they turned out to be much more pink pink....as in shocking pink. But they are very cute, and I think they helped me determine, that Nellie will wear baby pink, and Lucy will like pink pink. Oh to have two girls who like pink. But it was nice to get it sorted out so that I know more about what sort of clothes to buy for them.

Last but not least the socks. They are much better sown than shown on the sales pics. They seem like better quality than on those pics. I don't know who will wear which socks, but it's nice to already have a selection.

My conclusion, after having looked through all the stuff in the parcel was, that I shall soon order from Taobao again, and that Taobaotrends really does a great job. :)

Now I just need to find som cute, matching school uniforms for Lucy and Loki, and a pretty lolita-ish dress in babypink and babyblue for Nellie and Annabelle. It's not easy because I'm very picky.
Posted by Unknown at 22.50 Ingen kommentarer:

I've had a massive cold over the holidays, starting from the 23th December...yay....so I've been out cold...haha...

Anyway, I've constantly checked my email over the holidays, in hope to get a shipping notice from PW saying they've shipped Alice out...so far no luck, but in the FOF thread on DoA one or two people have already recieved their shipping notice, so I hope it is just a matter of days now. The latest on DoA to recieve shipping notice for a halloween event doll ordered hers with special makeup and stuff, so I hope mine is not that far behind as I ordered mine blank. >_<
I hate waiting... XD

I also payed my 2nd installment of my layaway on PW, and I just realized how long I'll have to wait to get my group together. oO" Ah well, I'll just have to practice some patience here...

So yeah, nothing much to tell at the moment...so I should probably just go back to studying for my exam next week. (Yeah, I'm procrastinating) ^^"

Oh right! Small update! I've sold my Luts Senior Delf Dahlia. I'm really happy that she found a new owner. ^^ So now I just need to find a new home for my AngelsDoll A-line 70cm Michael. Seems like AngelsDoll is out of business. I've heard rumors they will be back later this year with new stuff, but their site has been offline for almost a year now. :O
Posted by Unknown at 10.31 Ingen kommentarer: