I've come to the conclusion that I have to search for new homes for my normal skin tinies :/
For so long I've been trying to give them faceups and such, but I'm honestly just more interested in bigger dolls ;__;"
I feel so sorry for them, they've just been laying blank around all the time I've had them, so I've finally decided to focus on my bigger dolls and let all my small ones go except Alice.
Inspiration has not come to me for my small ones, even though I had a story for them. I just don't bond that well with child-like dolls I guess >__<"

So, now I'm hoping to finish some faceups for them, so that I can try to sell them. (It's me trying to make it up to them a little ^^")
I hope some nice people out there is in need of these gorgeous PW tinies. :)

Also, after deciding to focus on the bigger dollies, I wanted them to have a theme/shared story. The other night I had this really vivid dream about my dolls (NEVER happened before XD), where they were this cool crew.
I asked my awesome friend (Anne) for help, because she has an awesome collection and is super good with this stuff. <3
She wanted to know my plan, so I told her and she told me to go with it ;D
(Anne! I'll probably need you to cheer for me sometimes, because I'm afraid I'll have to make most of the clothes and stuff myself ;__;")
Anyways, the idea is pretty inspired by my all time favorite game; Final Fantasy IX.
My dollies are a bunch of outlaws who are traveling from city to city on their bad ass airship (pirate-ish). When they land in a city they pose as a traveling circus-ish troupe where they all have their different acts. By doing this they can get a lot of nice information about who is the big-shots in each city, and who they should target and rob (yeah, they are not all good). But somehow they always end up getting involved with suspicious incidents and stuff, making them sort of the anti-hero types. XD'

I haven't really thought much about the story or anything, but I think it would be super inspiring to work with this ^^
Lawrence (don't have a name for him yet, so I just call him his sculpt name for now) will be the leader/captain - 'cus LAWRENCE!! X'D sorry
Freyah and Ophelia will be his trusty assassin girls - I guess Lawrence saved them from the gangsters who had trained them and made them kill people. These girls are super loyal to Lawrence (obsessed?? ö_Ô) and will do anything for him. Their circus act is knife-throwing at each other XD
Not sure what Fitzie will be, I was thinking magician, but somehow he is just too grumpy looking X'D maybe a clown? No, that's cruel. Hehe
Then there is also Hunky Dory (no name ready for her yet either ^^") - I'm also at a loss with her...but I'll find something out for her. >:D
You guys have ideas for roles for Fitz and H.D.? :D

I've been so restless these last many days...Somehow I needed a new doll in my life I guess.

At least that is what I'm telling myself to justify my newest order... 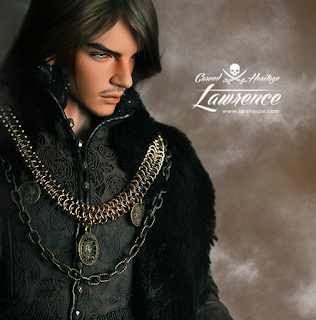 OMG! DID I JUST ORDER THIS AMAZING EID MAN? :O
I most definitely think I did! XD

I have this awesome friend (pretty little dolls), who ordered an EID Rex some time ago, and I've been BOMBARDED with the most gorgeous pictures of him ever since she received him.
And today, I caved in and ordered Lawrence...in real skin...because...LAWRENCE!! OMG!! *runs off to fangirl land*

I have NO name, NO character, NOTHING for him XD' But I'm just super duper happy and I just can't believe what I just did ö___ö)v

I ordered some stuff with him, so that he will not be naked when he gets here.
I've decided on a 3 payment layaway plan, so I suppose I'll have him home around mid-Juli :D
Whooop whooop! I'm crazy I know...but look at him! *____* he is a HUNK! And he'll be MY hunk!
Posted by Unknown at 23.37 21 kommentarer: