One White Rabbit coming up!

I did it!!! I'm both ecstatic and horrified at the same time! XDD'
Of cause, in the end, I decided I needed the White Rabbit (not Rabbit Goon as I earlier thought ;P). He is actually Dandy Tristan, but with other skin colour options than just the normal normal or white skin.
This time PW offered full sets, so off I went and got him in the blue-grey skin tone I love so and the full set which is über cute!! ^^ Only thing that did not come with the full set was the boots, which are unfortunately sold out from DollHeart...maybe I'll find some similar on Taobao ;D
The eyes where not sold via PW's page as well, so I'll have too look for some on Taobao as well. I really love the resin eyes PW sells, but I don't know if I would pay that much for a couple of eyes that might yellow - I tend to magically make all non-glass eyes yellow...TT__TT
And I also didn't get him with a faceup seeing as I've already spend SO much money on awesome faceup materials, so I should really do those myself. I also like to change the dolls faceups from time to time anyway, so I guess I just felt the $80 would be too much when I can do one myself for free - though not as awesome as Nornan's (one of PW's new faceup artists), but at least I'm getting to a point where I think it's decent. XD
I sort of jumped in right away and ordered him on a looong layaway, because I got afraid when I read that the full sets would be limited and might sell out quickly, and I wanted the full set so badly I just put him in the basket before I even had the money...I'm beginning to question my own sanity. Hehe
BUT! I do feel very satisfied, and I feel like these three (White Rabbit and my two Dlights) are the dolls I need for now. Since the Dandy boys came out in May, I've been deeply in love with the Tristan sculpt, and I was really sad that I had decided on not having SD-sized dolls anymore. But that promise didn't last long, for as soon as I saw the Dlight sculpt I was IN LOVE!! And as soon as I had ordered those lovely ladies, I was already thinking about giving them a male companion. Somehow I decided I only need one male...? So suntan Dlight - I'm sorry, but for now you will be without a man ;__; I'm so cruel (no, I'm being dictated by my wallet XD)
I looked through some of the Dollism NY pictures to make out the skin tones, and I think my diamond grey Dlight will look perfect in the arms of my blue-grey White Rabbit *___*
I like the idea that they are not totally the same colour, for that would make it a little too unified I think XD
But aw! I can't wait to get them all home and just go insane over their beauty >_<~<3

I'll also try to do a faceup this coming weekend. My weekend blues this past weekend - where I had ABSOLUTELY NOTHING TO DO - resulted in me lying in my bed all the time drooling over PW promo pictures, chatting with the awesome people in the PW FOC discussion thread on DoA, and watching Twin Peaks on Netflix. XDD'
I was a real couch potato >____<"

He is know as His Royal Hotness aka Count R. H. von Rabbit atm <3
Posted by Unknown at 22.36 4 kommentarer:

Shut up and take my money!! ...Or well, my imaginative money! XD

Yeah so, Peak's Woods just put up teasers of their new line for the Halloween event...WHY!! Of cause they are just amazing and stunning dolls! I am SO in love with the FOC Rabbit Goon, he is GORGEOUS!! *___* Why don't I have more money TT___TT

The idea PW has had this time is really awesome. They've redesigned some of the earliest FOFs, and have made them into FOCs! And do they look amazing? Oh they sure do! >____<
Damn you PW ;___; 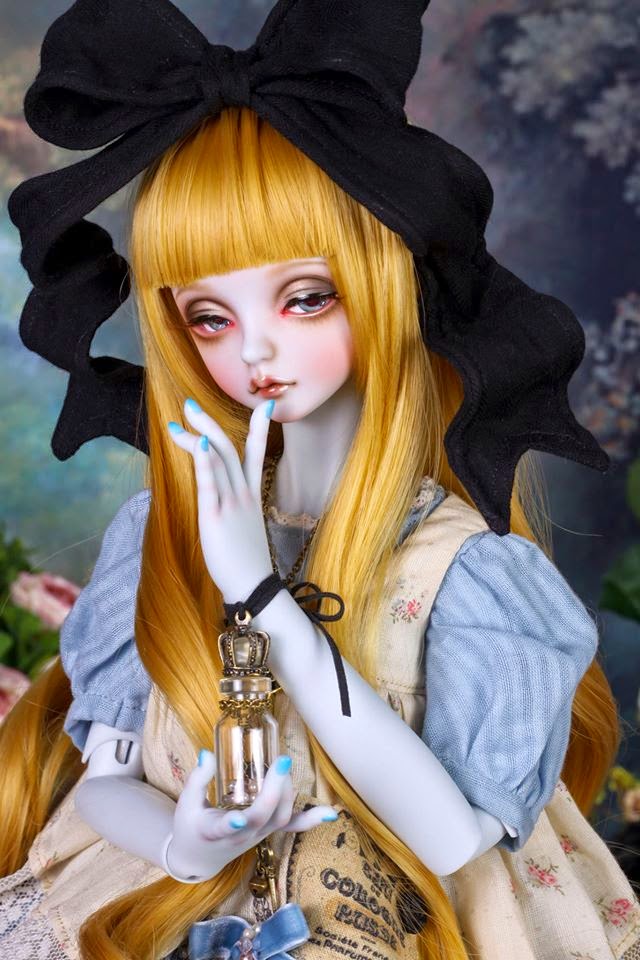 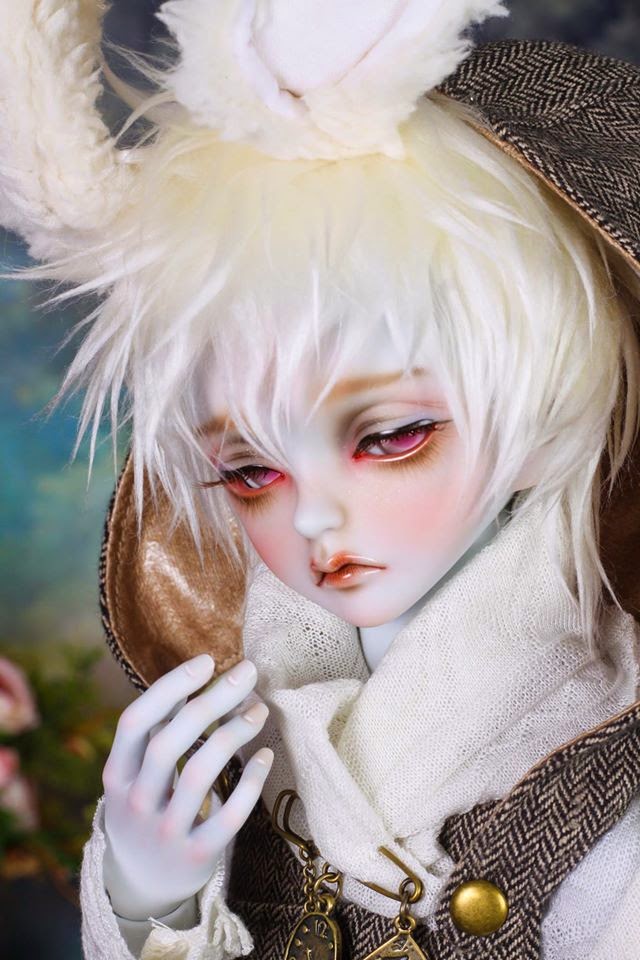 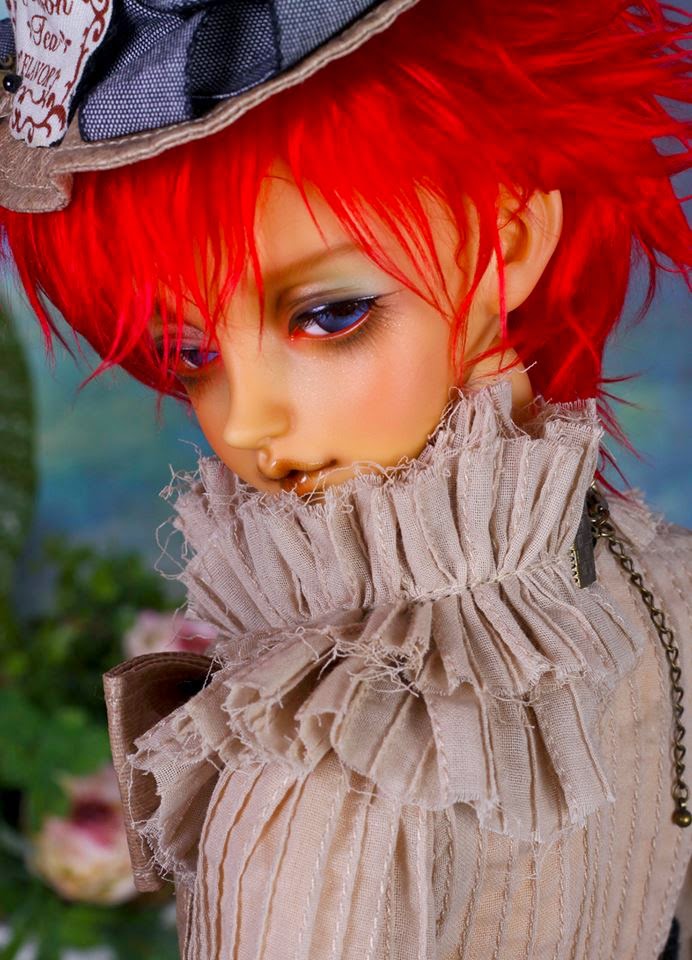 FOC LE Alice in Wickedland Mad Hatter (PW has not revealed which FOF he is supposed to be, but people believe he is the FOC version of Cheshire Goon)

A little later than promised. I didn't get to take any photos of Alice this weekend, but have in stead taken some with my phone this evening.
And yes, it's my computer in the background...sorry about that, but I didn't have the energy to set up a backdrop XD
I'll hopefully get to take some better photos of her soon, but here is a few pics to show off her new dress ;) 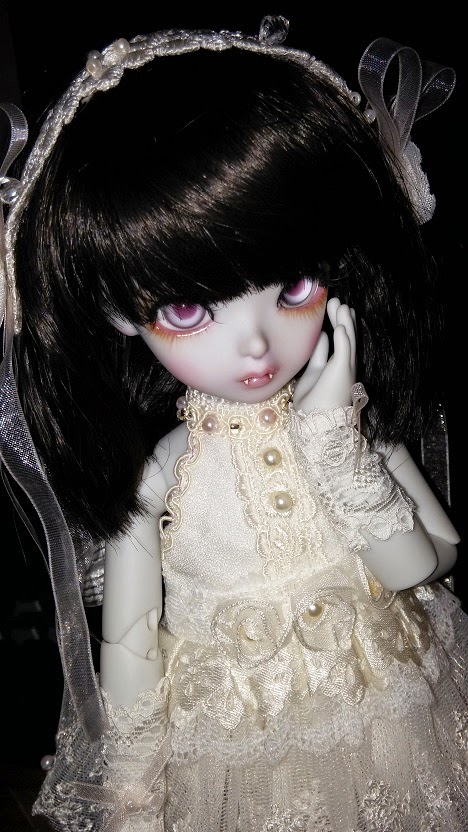 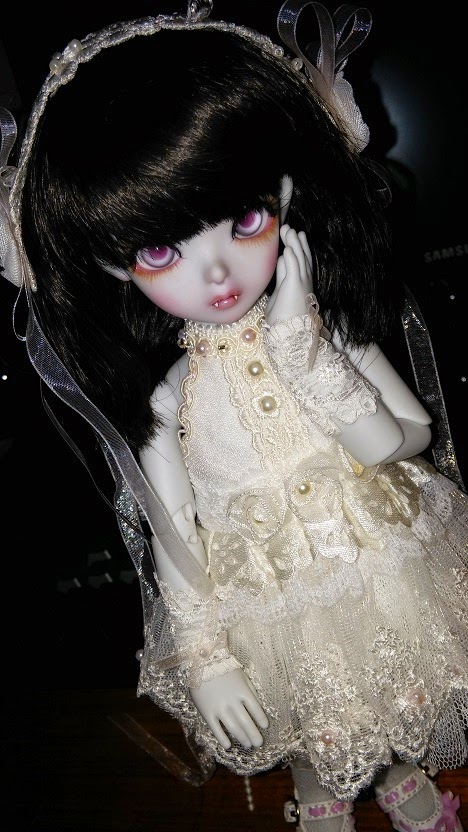 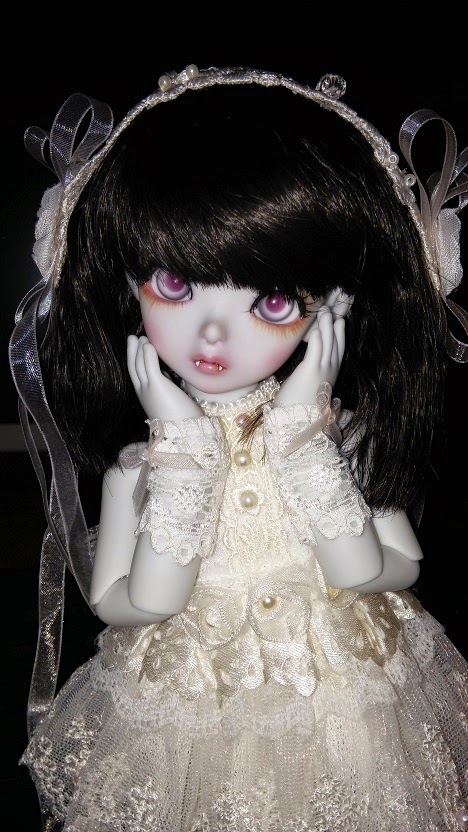 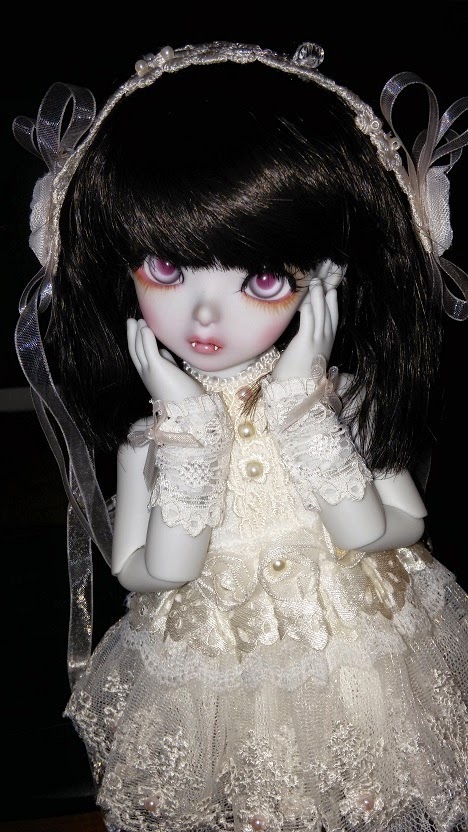 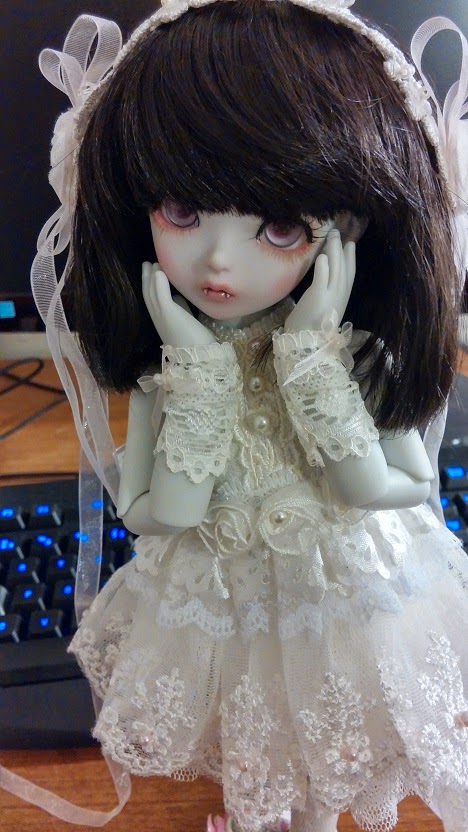 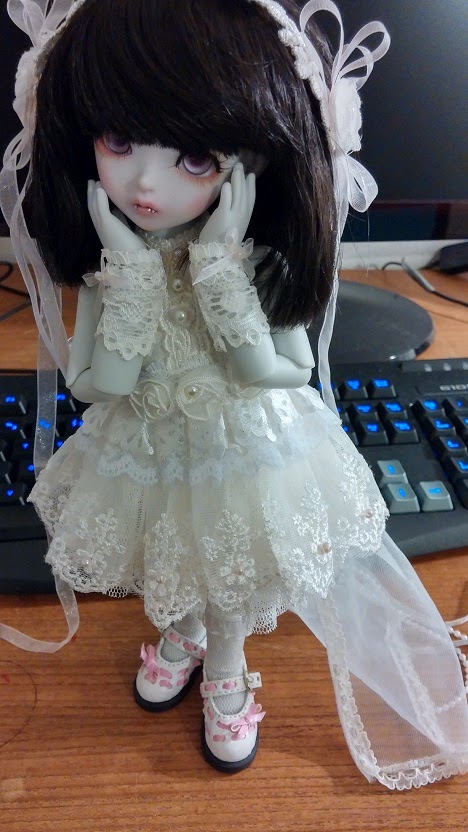 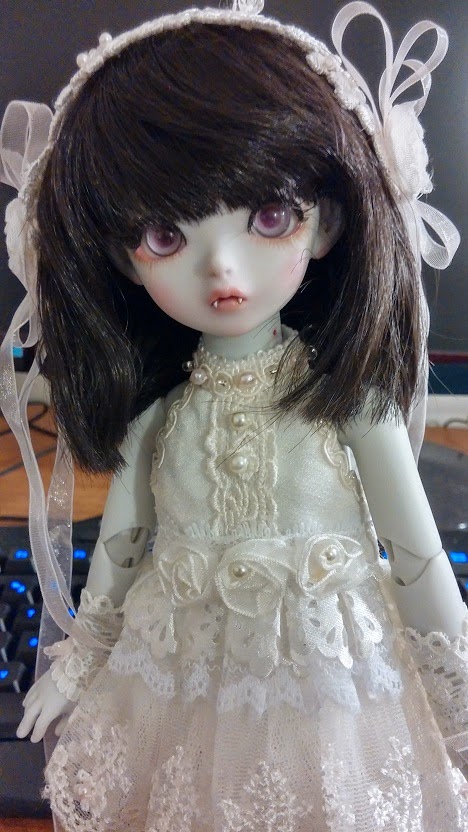 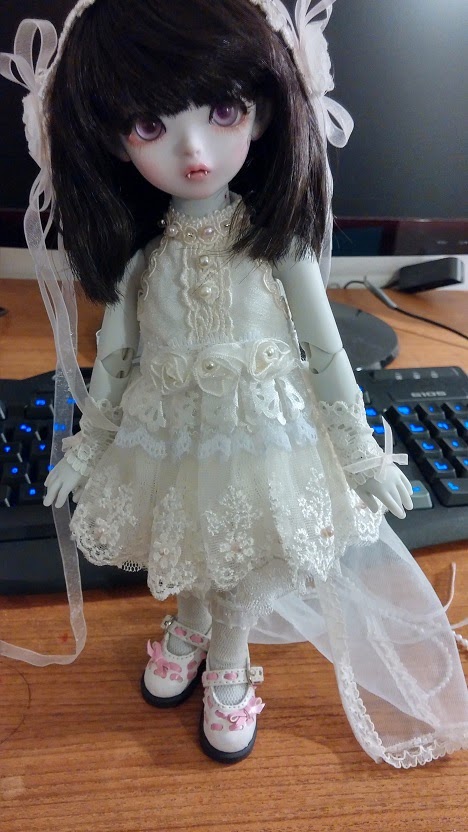 I still need to figure out how to secure the headband to her wig, as I don't like the look when I tie it under her hair - it makes the wig look weird.
I'm also considering sewing some pink pearls and stuff on the dress...to make it more pink and cute XD
The white makes her look so clean, so I think adding pink peals etc. would soften the look a little ^^
I'm actually also considering if the shoes are good enough...I'm just not sure if there are any better ones out there? >_<"
Posted by Unknown at 21.32 Ingen kommentarer: